Obituary for May McIntyre 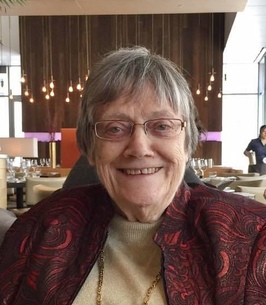 May, as she was known since childhood, died four days after her 91st birthday and four years after she was diagnosed with vascular dementia.

Her early life in Greenock, Scotland, was marked by the Depression and World War II but enriched by her parents’ love of books and music. After the War, her family began a new life in Toronto, where May met and married Karl McIntyre in 1951. When her marriage ended in the mid-1970s, May was left with three minor children, a Grade 10 education and a two-decade gap in her work experience. After completing high school and bookkeeping certificates at Humber College, she joined Prentice, Yates and Clark and worked for 24 years as a bookkeeper and office manager.

May’s life made her resilient but did not harden her. Her love was unconditional and openly expressed, and she was a sympathetic, open-minded confidant for family, colleagues, and friends. Nourished by her affection and support were her children Mary (Don Taylor), Ian (Jennifer), and Paul (Irina Marga); grandchildren Elizabeth Neal (Tim), William McIntyre (Corisa McKee), and Vesper Marga-McIntyre; and great-grandchild Edythe Neal. She was called a “second mother” by niece Evelyn Scott-Ludwig, and nephews David and Mark Wakefield.

When we think of May, we think of how easily she laughed and how rarely she cried. We remember stories of a wartime childhood in Scotland, the chilly Toronto faced by a young immigrant, and her encounters with wildlife at a Canadian fishing lodge. Her love continues to support us; we will kindle her memory in the hearts of family who are too young to have known her as we did. We will think of her when we hear the bagpipes, of course, but also when we hear Harry Belafonte singing “Jamaica Farewell.”

May was a member of Mimico Presbyterian Church where she worshipped for 65 years. As a Christian she was convinced that she would be reunited with the family that began its new life in Canada 75 years ago: her parents, Willie and Lizzie Thompson (née Lafferty), and her sisters Sadie Beattie, Peggy Thompson, Nan Scott, and Betty Wakefield.

“Thy kingdom come, thy will be done”

This obituary is protected by copyright by Mimico Chapel. Proudly Serving the Communities of Etobicoke, Mississauga, Oakville, Toronto, Scarborough, and North York. Mimico Chapel is located in the province of Ontario, Canada.

All rights reserved. This obituary is also archived at obittree.com